Canadian Timberframes takes its responsibility towards the environment seriously.  We source 90% of our timber (Douglas Fir) locally, from sustainable and ethically managed forest stands within a two hour drive of our facility. Our Douglas-fir is harvested locally from sustainably managed forests, ensuring that these forest eco-systems maintain their bio-diversity, regeneration and vitality.

Maximum utilization of the log, along with utilization of the by-product, allows for a healthy environment. All wood, off cuts, and wood waste products that are produced in our daily operations are sold to other manufactures or donated locally.

Industries are becoming more concerned with the environmental impact of their practices; the building industry is no different, with many companies aiming to decrease the "carbon footprint" of their projects. The result of well-managed forests is a never decreasing capacity of trees, because, aside from being a building material, trees and forests are an integral part of our ecosystem.

We are operating as a conscious manufacturing facility towards Zero Waste Practice. All of our wood bi-product is 100% utilized. Our logs and timber cants are dried naturally in our yard and drying room respectively. Our drying room is heated by radiant floor heating and our shop is heated by hydronic heating (utilizing our wood off-cuts and material bi-products to heat our boilers).

Our wood bi-product is utilized by our employees and locals to heat their homes or are used in DIY projects! Wood shavings and sawdust are transported locally to generate electrical energy or donated to local farmers.

90% of Canadian Timberframes timber is sourced from within a 125-mile radius or 200km drive from our plant. The timber is milled at one of our two sawmills. Checking is limited by using two-year-old logs that have been cant-cut to promote drying. Logs are milled to first obtain the largest and best quality products.

Secondary products (boards and slabs) are sorted by grade and quality for use in stairs, trim, siding and decking and other products. Shavings and sawdust from manufacturing are donated free to local farmers. The remaining bark slabs and off-cuts (less than 5%) are ground and trucked to a burner/steam unit in Golden, BC to generate electric power for Kicking Horse Mountain Resort. At nearly 50%, the largest amount of Canada’s total expenditure on silviculture (the care and cultivation of forest trees) occurs in the province of British Columbia.

The Chief Forester is required by law to determine how much wood can be harvested in each of the province’s 70 management units. Timber supply reviews can be postponed, or new harvest levels set, to accommodate abnormal situations such as insect infestations.

British Columbia is a world champion at reforesting its working forests. Although B.C. generally harvests less area annually than Ontario and Quebec, it plants two to three times more area per year

Less then 1% of Canada's managed forest is harvested each year; area's must be promptly regenerated. And plants over half a billion seedlings a year.

Air Drying is the Green Option

Canadian Timberframes air dry’s all of our handpicked logs & continues the process by air dry cants; unless we are specifically asked to kiln dry. 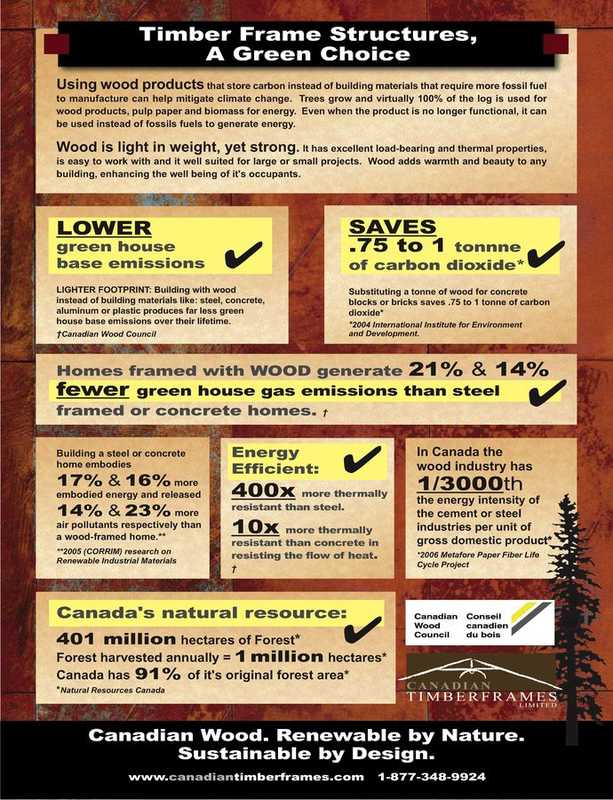 Are you ready to build your custom timberframe home?

Keep Up To Date

Are you wondering what our company is up to? Sign up for our newsletter.

Download our Photo eBook & get ready to be inspired!

Download our design eBook and start your planning today!